In this tutorial I'll show you how to (re)create the editor files for a map, in cases where there's no way to gain access to the original ones or if you had them, but lost them.

If you don't know what "editor files" are; these are the files located inside your map's Editor folder, putting it simply. From here they can be edited via BFEditor and saved in an uncompressed format, from where later on you'll compile the compressed files when you save.

In case your files get corrupted, you can resave from here where you'll always have working files.

Not all files edited with BFEditor (and indirectly, by you) are located here, like Staticobjects.con, Sky.con... those are in the main folder, can be read and do not need to be recreated in anyway, and some files are saved from bfeditor's rawdata folder, like lowdetail textures and undergrowth.

a map without its editor files

I'm going to E_pick Gulf of Oman from Battlefield 2 for this tutorial. You can E_pick any map or mod, process is the same.

To be on the safe side I'm going to create a temporary mod for this tutorial and copy the map to there, so I can still play BF2. If you're already using a copy of your mod intended for editing, then you can skip this and do it there.

Before you continue, go into the above directory, right-click on your maps' folder and untick 'Read only', in case the map's files have this enabled, in my case they do since DiCE made everything read only in their maps.

Go back to your map folder and create a new folder called Editor (Caps doesn't matter).

We're all set to begin.

We'll start with probably the most important aspect of editor files, the ground textures. Color, detail and lowdetail maps are already here, but they aren't in proper format and/or size to be edited.

Copy your colormaps, detailmaps and lowdetailmaps folders in your map directory to your Editor folder.

We'll begin with the colormaps. These do not need to be resized, only resaved. Select all the files inside the folder and drag&drop them into Photoshop.

Give it a few moments for all the files to be loaded. On the bottom right of your PS interface there should be an Actions tab, where you might already see your SalvageColorDetail action set. If you do not see this tab, press F9.

and select the SalvageColorDetail action set and under actions, saveColor, leave the source at Opened Files.

and let it rip. If you observe the Actions tab, you'll see Photoshop working on your opened files, which will get duplicated only inside Photoshop, don't worry it doesn't double the actual files.

In case you're wondering what just happened; what this action did was resave the colormaps to 32-bit A8R8G8B8 format with one mipmap. This is the format that editor can use.

Now, go to File>Close All or Alt+Ctrl+W, so you get rid of the opened files.

We continue with detail and lowdetailmaps. Both of these need to be resized and resaved to same size and format and as you guessed by now, the action set does the dirty work here.

and let it rip, then once done, close Photoshop. You now have ground textures you can work with.

If you want to use the lowdetail texture elsewhere or want it backed up, you can copy the lowdetailtexture.dds in your map's main folder to \Battlefield 2\bf2editor\RawData\Common\Terrain\Textures\LowDetail, and give it a suffix or rename it, so you know from which map it is.

Minimize the editor window, open up the hex editor and your map's main folder and drag&drop the terraindata.raw file into the hex editor.

If you fear a program crash, close the editor first, then do this. It might be too hard to read the text lines bunched up in between symbols, go to Tools>Options>Appearance tab and play with the settings 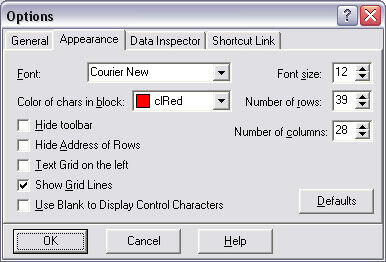 First four lines are the load lines for ground textures and ground lightmaps, the lower six are the detail textures. Follow the line til you get to the texture name and then switch to BFEditor, go to terrainEditor>Texture. Under the first layer's detail texture select the respective texture.

If the first texture name in terraindata is ie. grass01, then the first layer detail texture should be grass01

In my case the texture is detail_rock04_dark.

Select a material, in my case the appropriate one would be 'rock'. Look around your map to find where the texture is used, though first layers are always sloped areas.

Now generate lowdetailmaps. Since the texture is already here, as said, simply select a type (1 or 2) and click on generate LowDetailMaps.

For rock textures which are usually on the first layer, use the number 2 type and set PlaneMap to 1. Use type 1 for other layers.

Repeat this for the remaining layers. You can now close the hex editor. If you did everything correctly, your map should look something like this in the Detail mode now.

You now have working ground textures with detail and lowdetail textures. From here you can freely edit the terrain and paint new areas. :)

In case you want to relightmap the map, you'll need to start off with some lightmap settings. You can tweak these later, but first lets get them set up

In BFeditor go to Light>Preset and E_pick a lightmap preset. Note that this also changes the sky settings on your map, which we'll fix right away, but first lets save the lightmap settings.

In the Tweak bar, right-click on LightmapsSettings(Objectmode) and click Save Object mode then click the Switch to Terrain mode and save the terrain mode.

Now to fix the sky settings. Go again to Light>Preset, but scroll down below the lightmap settings and select your map's name, this will reset back to your map's sky settings.

To use your or other map's sky settings, the sky.con needs to be extracted (nothing else required, you don't need to extract everything, just the sky.con)

You now have lightmaps settings you can tweak and use to lightmap the map.

Still in the editor, switch to levelEditor (if you aren't already there) and under Layers in the rightside tab, start creating new layers for gamemodes and sizes.

You can create a new layer for each gamemode and size, or combine if the GPO is the same ie. the 16 player size is usually always the same in gpm_cq 16, gpm_coop 16 and SP1 16, so instead of creating three layers, create one with three gamemodes.

After you're done, untick the layers to make them invisible and lock them before saving, that will later on prevent you from seeing all of the GPOs overlapping each other when you open the map and selecting objects in different layers 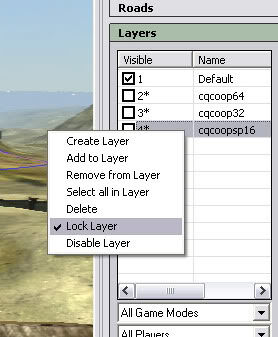 Save and close the editor.

Go to your map's Editor folder and open the GPO.con.

Its currently empty with some default lines, which you'll delete.

Keep the file open and go to the main folder>Gamemodes, then to each separate gamemode and size; let's start with gpm_cq and 64.

Open that GPO and scroll down to the bottom, where you should see what layer the combat zone and everything else is on.

My intended layer for gpm_cq is layer 2, so in this case no need to change this, however you will most likely need to change the layer, so here's how to do it. Press Ctrl+H to open Find&Replace function and under Find write the layer that's currently used in the file ie. 'layer 4', note the spacing.

Under Replace with write the layer you want it to be on ie. 'layer 2' then Replace All and give it a few moments to replace all the strings. Now press Ctrl+A to select everything and paste it into your empty Editor GPO. No need to save the file you just edited.

Repeat the above for all other GPOs, once done close and save the Editor GPO. You now have all the existing GPOs in one place to edit.

This is optional, if you plan to renavmesh the map or mess with control point placement or naming or you combined the SP/Coop GPOs etc. I'd advise not to do this and set up new Strategic Areas, otherwise your editor will crash while loading your map due an illegal CP error. If you still want to do it, it's very simple.

Go to a SP gamemode directory (SP1, SP2, SP3 or gpm_coop) and game size, next to the GPO should be an AI folder. Copy that and paste it into the Editor folder, then open it and inside it open the Strategic Areas file and change the layer with Find&Replace to match your SP GPO layer. If you have several SAs, copy paste them into the Editor one, same as with the GPO basically.

You can't recreate roads, since you need the spline.con data which you can't get from anywhere in the map's files, the roads are saved as compiled meshes. However, the roads are baked onto the colormap which should give you an excellent guideline to lay down new ones from scratch.

As trivia, the Photoshop action sets are very easy to create, I actually pondered including how to do those into this tutorial, but rather kept it game related and avoid extra confusion. Here's the link to the PS tutorial on action sets.

For those without Photoshop, theres an easy way to convertt the games DXT1 color textures into the A8R8G8B8 format required by the editor using the free NVDXT helper program by Nvidia :

Look for NVDXT which is a small command line tool. Download and install it. Copy the Color ( and Detail ) textures into the /editor folder you've created according to the tutorial.

Place the batch file in the /editor/Colormaps folder and launch it. It will convert all textures in a row. Place it in /editor/detailmaps and do the same. You're now ready to see and edit the textures in BF2Editor.

Retrieved from "https://classic-battlefield-modding.fandom.com/wiki/Recreating_Map_Editor_Files?oldid=2683"
Community content is available under CC-BY-SA unless otherwise noted.