Now that we’ve created our basic mod, it’s time to actually start making the assets to put in it.

We’re going to start out with a simple building: the bunker. This will be an all-purpose building, the base providing cover from enemy fire with window slots allowing soldiers to shoot back, and also a small tower providing a better view of the battlefield, a vantage point for laying cover fire and sniping, and also a potential platform for mounting static weapons such as machine guns and TOW rockets.

Before we begin, do the following:

Note: If you already have an "Objects" folder in your RawData folder, please copy whatever files and folders are necessary to create the following path:

The folder "_MyBase01" should also contain the folder "textures".

The point here is to create the same exact directory structure from "Objects" on as that of your mod. This way when you import something into the editor, the resulting object will get placed in the correct directory.

Note: Create any folders necessary to create the above path. The point here is to create the path in your mod to where the object will be placed. We are copying the textures to their final destination now because the Max exporter does not automatically move them.

You are now ready to follow along with "Battlefield 2 Modding Tutorial 4 - Building The Bunker".

This tutorial also requires that you have installed all the Max tools that shipped with the editor.

We’re going to start with a simple sketch of the building. This could come from a designer on the team, or it may be something you draw up yourself. The point is, even if you are just modeling for yourself, it’s good to at least draw out a basic form on paper to help visualize what you’re trying to do. Here’s our sketch for the bunker:

Now that we’ve got a blueprint of sorts, we can begin modeling.

Here I’ve roughed out the shape of the bunker, creating the interior and exterior and a system of ramps to get to the top. Notice that I haven’t put in details like the windows or the crenalations at the top of the tower (the notches in the sides of the walls). At this point we just want the basic shape so that we can export and test the overall design. Since we will probably have to make changes, there is no sense wasting time on details that would have to be reworked later. 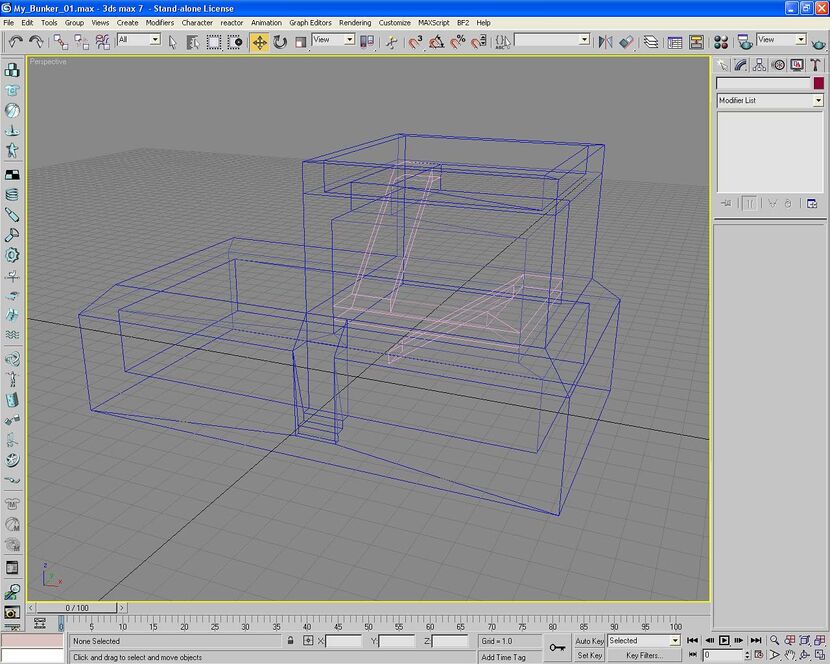 Since this is the projectile collision mesh, we want to optimize it by deleting any small details that we don’t need. If there were things like antennas or other small items attached to the building, we would delete these. We also want to simplify the meshes where possible. The less polygons the game has to test against collisions, the faster the server will run. This building is currently so simple that there isn’t much to optimize. Even so, we should still do the following. 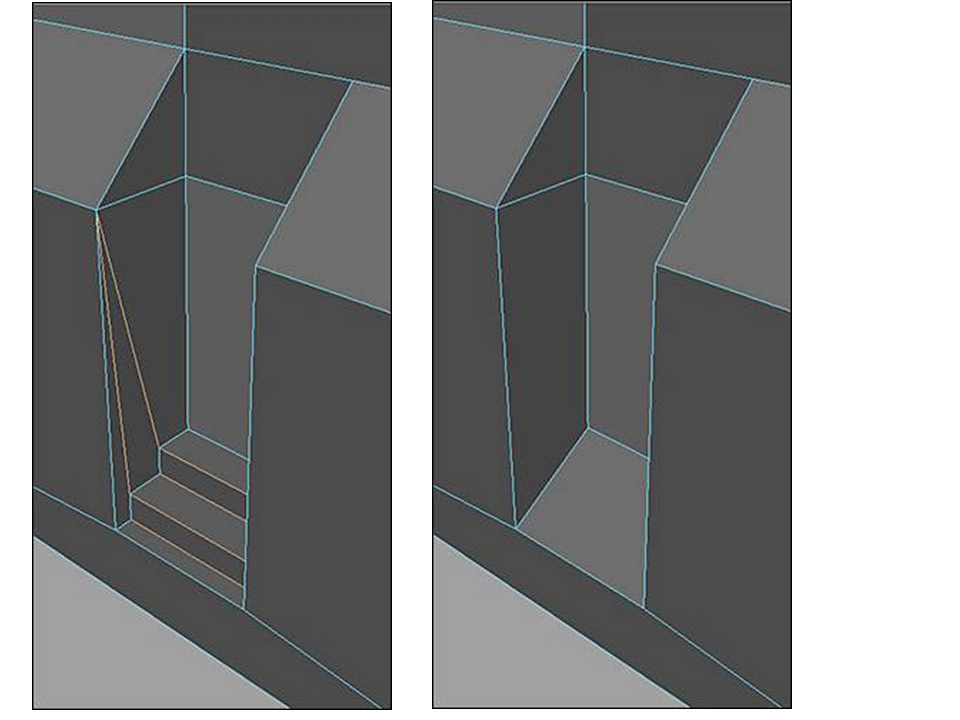 Note: make sure you remove any extra vertices that may have been left behind.

When you’re done, the Bunker should look like this:

We’ve completed the optimization of Col0. The next step is to create the soldier collision mesh, Col1.

Normally we would do further optimization on this mesh, but there is really nothing to remove since it’s so simple. More about this later.

This mesh would also be optimized, but we’re not going to waste time on it now since it’s just for preliminary testing. Keep in mind that we will be going back and adding more detail to the visible LOD once we are satisfied that the overall design works. At that time we will also be deleting the current collision meshes and creating them again from the updated LOD. Reworking objects is just part of the modding process, so it’s best to get used to it now.

The next step is to texture the pieces we created. You may either continue your work or open “My_Bunker_02.max” for this section.

You can change the color of the shader to anything you like. The color is just to make it easy for you to identify. All the importer is concerned about it the name. Here I’ve given it a light yellow color so I can identify it easier. You may also wish to check the box next to “Wire” so that only the wireframe shows. This isn’t strictly necessary, it’s just an easy way to display and identify collision meshes.

Concrete is the name of one of the materials in the game, so what will happen is that the importer will read this name and apply the material to the collision meshes. This is why it’s so important that it is spelled right. For a complete list of materials, consult the Material Editor section of the BF2 Editor.

Now we have to texture the visible mesh. Since this is just a test and we know we are going to add more detail later, we are just going to apply a simple placeholder shader for now.

What we’ve done is to create a cgFX shader and assign it to the selected object. We now have to assign textures to our shader.

Make sure that you’ve also clicked on “Show Map in Viewport” in the Material Editor. If you are in “Smooth + Highlights” mode your bunker should look something like the following screenshot. Don’t worry if the texture placement is different because we haven’t set up the UV’s yet:

Your UV’s should now look similar to this. Don’t worry if yours looks a little different. The important thing is that we’ve given each polygon some surface area and none of the UV’s overlap:

Notice that I’ve also highlighted the buttons from the previous few steps.

Now that we’ve laid out the basic UV’s on all the pieces, the last thing we have to do texture-wise is create a second set for the visible mesh. More on this in a later tutorial. For now you just have to know that the Base texture in the shader needs one UV set and the detail texture needs a second one.

What we’ve done is to create the two necessary UV sets for the cgfx shader we are using. If you were also using a dirt layer in your shader, you would need a third, and if you added the crack layer, then you would need a fourth.

The reason we used the Unwrap UVW method is because this is the only modifier that lets you edit your UV’s in the “Edit UVWs” window. All other methods make you work with your object as a whole instead of on a per-face basis.

Note that you will not be able to see all of your layers at once with the current shader. Right now we are just interested in setting up the staticMesh object for export, so we aren’t really concerned with this, but if you want to see what your multilayered shader looks like, do the following:

If you want, you may now experiment with using the “Edit UVWs” window to move the UV’s around on your two Unwrap UVW modifiers and you will see the textures update in your display.

Once you are done, make sure you re-assign the original BF2StaticMesh2 shader that we created or your building won’t export correctly.

We’ve created and textured all the pieces. Now we have to set up the hierarchy before we can export. To do that we’ll use one of the wizards.

You may either continue with the scene you’ve been working on or open “My_Bunker_03.mb.

First we have to clean up the pieces so that there is nothing in the modifier stack.

Notice that I’ve also opened up the “Select Objects” window and clicked on the “Display Subtree” option so that you can see the hierarchy. Your hierarchy should look the same.

Several new objects have been created. These all have specific names that the exporter needs to read in order to create the proper code for the game. You won’t actually see these additional objects in the game. They are just placeholders in the Max file.

We are now ready for export.

This will now bring up the normal export window. We have a few more options to set here.

You have now completed your first staticMesh Export. If all went well, you should now have the directory “C:\ Program Files\EA Games\/Battlefield 2\mods\MyMod\Objects\StaticObjects\_MyBase\My_Bunker”. Inside this folder should be a folder labeled “Meshes” and a file labeled “my_bunker.con:

In a later tutorial we will import this into a custom level.

If you have any problems or want to compare your version to the finished version, open up “My_Bunker_Complete.max”. You can use this file as reference for setting up basic staticMesh objects.

Retrieved from "https://classic-battlefield-modding.fandom.com/wiki/Battlefield_2_Modding_Tutorial_4_-_Building_the_Bunker_in_3dsmax?oldid=1500"
Community content is available under CC-BY-SA unless otherwise noted.